© 2023 Smart + Strong. All Rights Reserved. Terms of use and Your privacy. Smart + Strong® is a registered trademark of CDM Publishing, LLC.

How the Liver Works

The liver is one of the largest organs in the body. It has many important metabolic functions. It converts the nutrients in our diets into substances that the body can use, stores these substances, and supplies cells with them when needed. It also takes up toxic substances and converts them into harmless substances or makes sure they are released from the body. 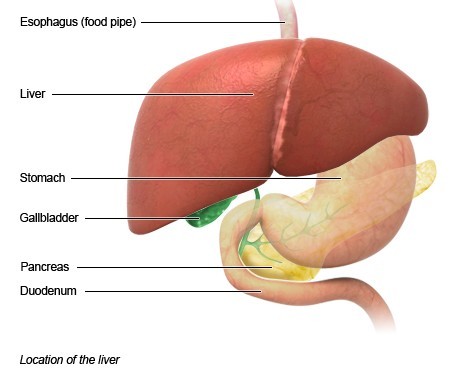 The human adult liver weighs about 1.4 kg (3.1 pounds) and is found in the right upper abdomen, below the diaphragm. It takes up most of the space under the ribs and some space in the left upper abdomen, too. Viewed from the outside, a larger right lobe and smaller left lobe can be distinguished. The two lobes are separated by a band of connective tissue that anchors the liver to the abdominal cavity. The gallbladder, where bile is stored, is found in a small hollow on the underside of the liver.

Liver tissue is made up of lots of smaller units of liver cells called lobules. Many canals carrying blood and bile run between the liver cells. Blood coming from the digestive organs flows through the portal vein to the liver, carrying nutrients, medication and also toxic substances. Once they reach the liver, these substances are processed, stored, altered, detoxified, and passed back into the blood or released in the bowel to be eliminated. In this way the liver can, for example, remove alcohol from your blood and get rid of by-products from the breakdown of medications.

With the help of vitamin K, the liver produces proteins that are important in blood clotting. It is also one of the organs that break down old or damaged blood cells.

The liver plays a central role in all metabolic processes in the body. In fat metabolism the liver cells break down fats and produce energy. They also produce about 800 to 1,000 ml of bile per day. This yellow, brownish or olive green liquid is collected in small ducts and then passed on to the main bile duct, which carries the bile to a part of the small intestine called the duodenum. Bile is important for the breakdown and absorption of fats.

In the metabolism of carbohydrates, the liver helps to ensure that the level of sugar in your blood (blood glucose) stays constant. If your blood sugar levels increase, for example after a meal, the liver removes sugar from blood supplied by the portal vein and stores it in the form of glycogen. If someone’s blood sugar levels are too low, the liver breaks down glycogen and releases sugar into the blood. As well as sugar, the liver also stores vitamins and minerals (iron and copper), and releases them into the blood when needed.

The liver also plays an important role in the metabolism of proteins: liver cells change amino acids in foods so that they can be used to produce energy, or make carbohydrates or fats. A toxic substance called ammonia is a by-product of this process. The liver cells convert ammonia to a much less toxic substance called urea, which is released into the blood. Urea is then transported to the kidneys and passes out of the body in urine.

You have been inactive for 60 minutes and will be logged out in . Any updates not saved will be lost.